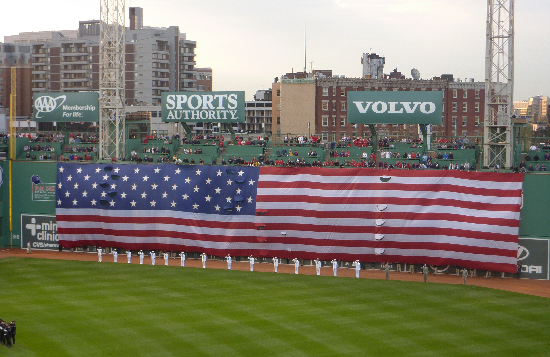 The day after Osama bin Laden was killed, John Bonaccorso (The Drowning Frog, The Chocolate Starfish) was at a Boston Red Sox game at Fenway Park.  Just before game time the announcer asked everyone to rise for a moment of silence.

34,000 fans in the stadium stood and watched as a giant American flag was lowered over the famous Green Monster wall in left field.  “During that moment of silence,” John said, “You could have heard a pin drop.”

This has been a week for reflection  . . . and a temporary, collective sigh of relief.  It’s been a week to talk with friends near and far about about the events and emotions that have shaped us since 9/11.

Like most Americans I watched from the sidelines as 9/11 and its aftermath unfolded.  Over the next ten years I followed the news stories about the rise of Al-Qaeda and the search for Osama bin Laden.

But some of the friends I talked with on the phone this week did more than observe.

When I knew these friends in college they were just regular guys.  Many of them worked with me at the first bar I managed, The Mug in Cortland NY.  The bartenders and doormen were all from my fraternity (Beta Phi Epsilon; SUNY Cortland) — even the cleaning guy was a Beta buddy.  Jim “Cowboy” Van Wormer was a starting defensive end on the football team; he mopped the place up early each morning before heading to classes.

But when they left college, a lot of these buddies took jobs that led them directly into the tidal wave of events that followed 9/11.  Talking with them this week was like that first chill from the headlines — all over again

At the time of 9/11, Mike Galvin was Commander of a SWAT Unit in Florida while other fraternity brothers were with the FBI, or were State troopers and police officers — and all of their jobs took on a new and heightened dimension following the attacks.  Matt Quinn was with one of the largest banks in America, and the department he headed quickly switched it’s focus from tracking potential money laundering by organized crime to tracking the finances of terrorist groups. 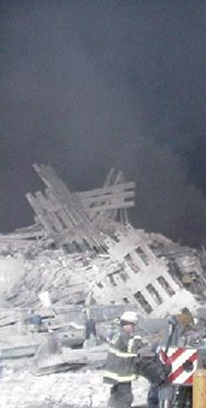 Charlie Kerrigan was at Ground Zero on 9/11.  With extensive training in “confined space and high angle rescue”, Charlie and his men from the Rockville Centre Fire Department on Long Island were called to the World Trade Center immediately after the attacks.

Charlie’s nickname is “Buff”, short for “Buffalo.”  At 6’5″, 250 lbs., he was an offensive lineman for the Cortland State football team, big number “75″.  He was blocking the opposition as Billy Shear kicked his historic field goal during the homecoming game against Hobart College.  (Shear’s 61-yard field goal was the first ever “over-sixty” kick recorded in football at any level — high school, college, or professional.  The first “60-yarder” in the NFL wouldn’t come until four years later, in 1970.)

For as long as I’ve known him, Charlie has been the big/quiet type.  His emails are short, typically only a sentence or two, sometimes only one word.  (Like”OK”, or “No.”)  But I’ll never forget the email he sent us after being thrust into the carnage at the WTC towers.  He wrote about thinking that he was on another planet, in a different world.  He said that the devastation was the most horrible scene he’d ever witnessed, and that he prayed he would never see anything like that again.

Bob Guzzo became US Navy SEAL after leaving Cortland State, and it was speaking with Bob this week that for me really put a human face on all of this — all the work and sacrifice it took to bring to justice the most wanted man in the world, Osama bin Laden.

In his 25 years as a SEAL commando, Bob served in places like Croatia and El Salvador.  “I‘ve been all over the world,” he said, “There aren’t many countries I haven’t been to.”

Late in his active career Bob was seriously injured and had to have both hips replaced.  “I figured it was time to give up the night missions,“ he told me, “Time to give up jumping out of helicopters and being a gunslinger.”

Bob’s new assignment was to the Pentagon as an Anti-terrorism Officer.  He and his team secured office space and were setting up the necessary equipment — they didn’t even have computers installed yet.

Some of Bob’s team members were still checking in when the Pentagon was struck during the 9/11 attacks.

One hundred eighty-four people were killed at the Pentagon that day.  As Bob rushed out to help secure the area and attempt to rescue survivors, his friend and fellow Anti-terrorism Officer Mike Garcia took this photo of the devastation.  (“Mike probably took 60% of the photos you see from the Pentagon that day,“ Bob told me. “Some of his photographs are in the Smithsonian.“) 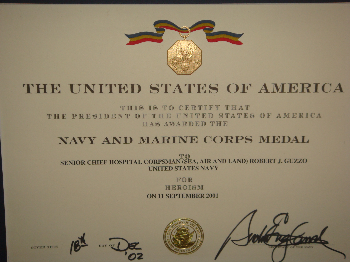 Bob was awarded the Navy and Marine Corps Medal for heroism for his efforts on 9/11.

For the next year Bob worked for the newly-established Pentagon Force Protection Agency, then spent a year at the Defense Threat Reduction Agency before being promoted to Deputy Chief of the Anti-terrorism and Force Protection Branch of the Security and Counterintelligence Directorate.

“We were running around like crazy after 9/11,” Bob recalls of his counterintelligence work in those days, “It was like chasing ghosts.”

“On the night of 9/11 Rob called me called me from the (Beta) house,” Bob Sr. said, “He told me he wanted to join the Navy SEALS after graduation. He wanted to go after these guys.”

“He’s my son,” Bob said, “And I was concerned about him getting involved . . . there’s no guarantee when you go in that you’ll come out alive.  But I supported his decision.”

Rob Jr. was in BUD/S class 251, and became a member of Navy SEAL Team 5.  Upon graduation he was awarded his dad’s old SEAL Trident, the first medal the commandos receive when they complete their training.

Rob Jr. went into battle at Ramadi, Iraq in 2006. His buddy Marc Lee lost his life there, the first Navy SEAL killed in the war.  Marc and Rob had gone though SEAL BUD/S training together.  (In background of the picture you can see the name LEE — the camp at Ramadi was renamed CAMP MARC LEE in Marc’s honor.)

Rob Jr. made it through the Iraq war and he’s back home now. He’s pursuing a career in acting (in action films, go figure.)

Picturing Charlie K at Ground Zero on 9/11, and talking with Bob Guzzo and Rob Jr. who were actively engaged in combat in this war on terrorism, I thought their lives have been so different . . . it’s a little scary.

I’ve never thought of myself as living a quiet life. During my years behind the bar, I’ve had my share of confrontations and scuffles, and I’ve had a few heart-pounding moments.

One night at The Mug, a guy walked up to the bar and pulled a gun on me.  He cocked the hammer back and put the end of the barrel against my forehead.  I remember weighing my options sort of calmly and analytically — then I took the gun away from him and knocked him down with a blow to the side of the head.  I wasn’t scared until after it was over.

“But that was simply reacting to something I couldn’t avoid,” I told Bob.  “I don‘t think I’d have the balls to do what those Navy SEALS did . . . to willingly jump into the shit when you could just as easily choose not to get involved.”

This wasn’t a movie or a video game.  Those Navy SEALS flew in under the radar, unannounced in a foreign country.  Two dozen of them repelled from their helicopters into darkness; they lowered themselves inside the enemy compound of the world’s most feared terrorist.

They knew they’d be facing enemy fire, but didn’t know when or where it might come from. They had to get in — win a life-or-death gun battle — and then get out without being shot down on the return flight by Pakistani fighter planes.

“They were just doing their job,” Bob said, “They were doing what they’d been trained to do.”

“On a mission,” he explained, “You’re not thinking about whether or not you’re going to make it back home.”

“You train and train,” he told me, “It’s unbelievable how difficult and tortuous the training is . . . but when the time comes, your body reacts.  You simply do what you have to in order to complete the mission.”

“An hour later, maybe two days later, you might think, “Holy Shit!” . . . but at the time you’re completely focused on the mission.”

That makes sense.  I can understand how it works . . . but I’m a little embarrassed to admit that I don’t know if I’d have guts to do it.  These guys are different; they’re flat-out heroes.

I can’t remember recent conversations that I’ve enjoyed more than talking with Bob Sr. on the phone this past week.  There were times as we talked that I felt the hairs stand up on the back of my neck. 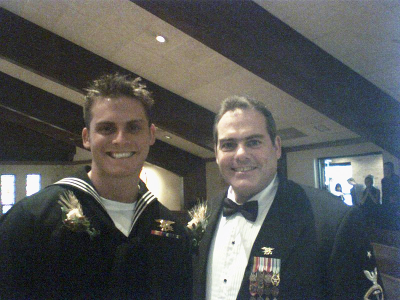 And throughout our conversations I heard the same thing time and again.  I heard Bob’s great pride in America and his willingness to put his life on the line for his country if he had to.

During one conversation he stopped and said, “I am very proud to be an American, a Navy Seal and a Beta man.”  His son Rob said the same thing in a follow-up email.

I guess it’s out of fashion nowadays to talk about your college frat — but I am proud to be a member of Beta Phi Epsilon and I’m proud to know these men.

Our fraternity is best known for its long string of All-American athletes, Olympic medalists and National Hall of Fame coaches.  It’s known for it’s high school and college teachers and administrators, and for outstanding contributions in many fields.   (I exchanged more emails this week with Beta alumnus and long-time friend Joe McInerney.  He spent two decades teaching and writing books on human genetics before becoming executive director of NCHPEG – the National Coalition for Health Professional Education in Genetics. He helped educate state and federal judges about genetic evidence and the law after the O. J. Simpson trial.)

But being jocks at heart, many from our fraternity went into the military, law enforcement and served as firemen — and that got them directly involved in the dedication and sacrifice that led to the events of this past week.

Today my hat is off to this group especially . . . these guys just have balls made of brass.

(Ed. note, 5/12:  Mike Garcia just sent us more photos.  Here are three of them.  Please feel free to leave a comment on this post below.) 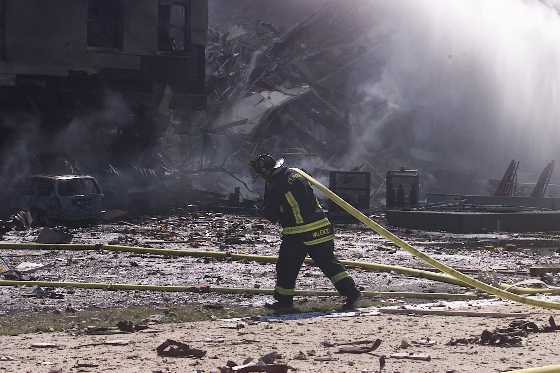 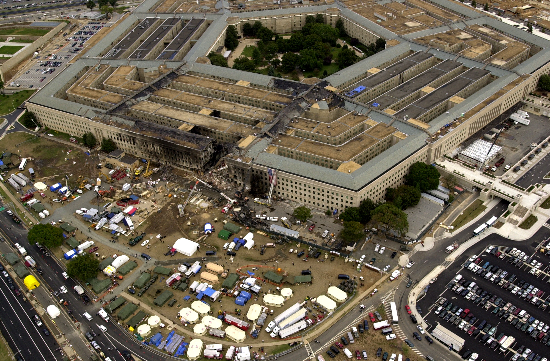 Aerial view of the damage. (Photo by Mike Garcia)