SOMETIMES A GUN MAKES ITS OWN POINT

I have to thank Beta Phi Epsilon frat brother Harry Waller for reminding me of the stories posted this week, and last (Free Beer.)  He stopped into Johnny D’s a while back with his wife and brother-in-law.  Harry and I told stories for an hour about those days at Cortland, and of course we talked about The Mug.  That college joint was my first bartending job.  Here’s something else from that time . . . 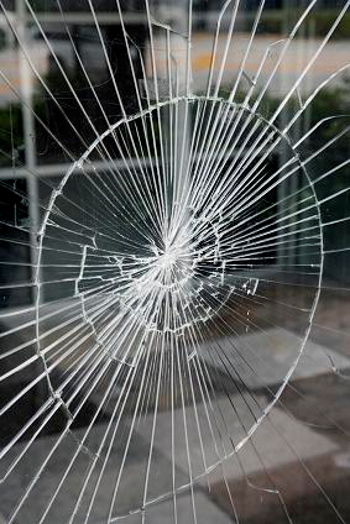 It started out as a typical night, but after a brief scuffle between some unruly customers and the doorman, the whole thing turned into one big learning experience.  One educating domino toppled into the next, and I became aware of an aspect of this business I’d never considered.

It began with our doorman shoving a couple of guys out, when one of them crashed into the glass front door.  There was a loud crack, and now the glass had a circular fracture with long cracks running out in all directions.  The glass was barely holding in place — one push, and the door would be nothing but a metal frame.

“You think it will hold through the night?” Tony G. asked.  I’d called the owner to tell him what happened.

“Hate to call the glass guys this late,” Tony grumbled.  It was one o’clock in the morning.  “It’ll costs an arm and a leg to get them out at this hour,” he said, “Can you board it up?”

There were some sheets of plywood in the basement, and I figured one of them could be cut to size, but I didn’t know how secure it would be.

“I’ll do the best I can, Tony,” I said, “Maybe I’ll just stay here overnight, and leave a message with the glass company to show up in the morning.”

“If that’s what you want to do,” Tony replied.  I could almost hear him smiling over the phone.  It wasn’t just that he was saving money . . . I could imagine him beaming because I was such a dedicated guy.

Truth be known, it wouldn’t be the first overnight I’d spent in The Mug.  It happened now and then, although all the other times were just for fun.  Sometimes I had a female companion.  There was a room in the basement with a bed and a stereo, but believe it or not most of the time they liked the idea of doing it on the pool table, or right on top of the bar.  We were all college kids.

Other times it was just me and a bunch of guys not ready yet to call it quits.  We’d lock the front door and continue drinking in the back room.  Sometimes we wouldn’t leave until dawn.  (As I mentioned last week, Tony let me do pretty much whatever I wanted.)

“Tell you what,” Tony said, “I’ll send somebody over to keep you company.”

Rudy worked for Tony’s pinball company.   He had his pager with him at all times, and he was on call 24/7.  His total work week might have been less than 40 hours, but he never knew when those hours would be.

Morning, noon, or night he might be called to one of the joints where Tony had his equipment.  Rudy might repair a broken pinball machine, restock a cigarette machine, or unclog a pool table.  He’d swap out the old equipment for something new, or just collect the money from their coin bins.

“Rudy will be there in less than half an hour,” Tony said.

When Rudy arrived, we drew a pitcher of beer and went into the back room to play pool.  We played game after game, refilling the pitcher more times than I can remember.

It was during one of those games that I began to feel that something else was going on here.  I started to think that Rudy was doing more than just keep me company.

He was feeling me out.  With each subtle comment, he seemed to steer the conversation.  I began to think that Tony had asked him to do this.  Maybe they wanted to know more where my head was at, running a place that Tony owned, but never spent much time in.  If I saw Tony once a month, that was a lot.  Once a week, early in the morning before anyone was there, he’d come in and clear out the extra cash in the safe — that was it.

But he had his way of keeping track of things.  I remember when I first began running The Mug, Tony had recommended that I take a bartender from one of his other joints to work the day shift.  That was fine with me — all the other bartenders were my college buddies, and staffing days would have been a problem.

Tony’s choice of daytime bartender was a young woman I nicknamed “Boom-Boom.”  She was a great gal, and with her physique and style she brought in a lot of day business we wouldn’t have had otherwise.

But I knew she was also Tony’s eyes and ears.  When she first started we had a little confrontation.

My best buddy Jim Fennell and I had been working in the basement, moving around kegs in the walk-in cooler, straightening up the stacks of cases of beer.  Now we sat at the bar and asked Cindy for a pitcher of beer and some shots.

She stood there for a minute, as though expecting us to pay.

After talking with Tony, she handed me the phone — I explained that the staff would be doing a lot of work for free, but I didn’t think they should pay for drinks afterwards.  Tony agreed, and Cindy never questioned anything else I did.

Now I had the feeling that Rudy was doing something similar.  He was discretely feeling me out for Tony.  He was asking about the way things were run in the bar, and how I felt about Tony.

I didn’t mind.  I really liked Tony, and respected him.  I also had the feeling he was the wrong person to fuck with,  . . . so I always let him know exactly what I was doing.

Anyway, Rudy’s tone during this conversation was casual and relaxed, so I just enjoyed playing pool and drinking beer with him.

We played pool and drank all night after hours.  Rudy was a lot better than I was, so I never won a game.  I was happy just to make an occasional good shot, and to refill the pitcher regularly.

At one point during the night, Rudy got a buzz on his pager.  When he was at the pay phone, I heard him say something like, “I’ll take care of it in the morning.  Don’t worry about it . . . I’ll straighten it out.”

And we went back to playing pool.

The glass guys had the door fixed by 8:30 A. M., and Rudy said we should go have breakfast.  He drove us to a small diner just outside the small town of Cortland, where we had ham and eggs with home fries, and plenty of coffee.

We drove to a small, run-down bar a little further down the road.  There was a Smith-Corona typewriter factory across the street from that bar.  I knew both the factory, and the bar.  I’d worked one of the worst summer jobs I’ve ever had in that typewriter plant, hauling buckets of greasy metal parts to the men and women bent over at the large, ominous grey machines.

It was 9:30 or 10:00 in the morning when we pulled up to the place, but every seat at the bar was taken.  I was sure these were all night-shift workers from the factory.  It might sound weird to be drinking at that hour, but to them it was just a beer after work.

Rudy motioned to the bartender — who I assumed was the owner — indicating that he wanted to talk.  We went into the hallway leading to the rest rooms.  I don’t know why I went with them . . . I guess I just didn’t know what else I was supposed to do.

There was a cigarette machine against the hallway wall.  It had one of Tony’s stickers on the glass front.  The joint also had a pool table and a jukebox, which I now assumed were Tony’s as well.

“Tony has always thought of you as a friend,” Rudy said to the man once we were in the hallway.  He was speaking in low tones.  “He hopes that friendship will continue,” Rudy said.

There was nothing ominous or threatening about the way Rudy was talking . . . but then he reached behind his back, reached under that large shirt that he never tucked in.  When his hand came out, he was holding a semi-automatic pistol. 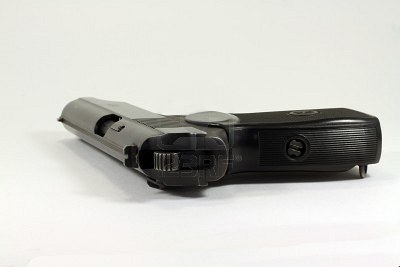 He set the gun on top of the cigarette machine that we were standing by.  Then he continued talking in that calm but steady voice, as though nothing out of the ordinary has just happened.

I really didn’t want to be involved in this, so I turned and walked to the pool table.  As I walked away I heard Rudy tell the guy that Tony just wanted everyone he did business with to be happy.

As I played pool by myself, I glanced over at the two of them now and then.  Neither seemed excited or agitated . . . they were just talking.  But the guy definitely had a more somber look on his face now.  All the while, that gun remained on top of the cigarette machine.

Rudy made a call on the pay phone before we left the bar.  I thought I heard him tell someone that it was all set, that the machines would be staying in the place.

We left the bar, and Rudy drove me back.  I didn’t mention anything about the bar owner, what I’d overheard of their conversation, or the gun.  On the ride back we just talked about sports, and drinking, and women.

Once back at the frat house though, I couldn’t help but think that Rudy had taken me to that joint for a reason.  Maybe Tony had asked him to do it.  Rudy was letting me know the lay of the land, now that I was running one of Tony’s bars.

(Ed. note:  we had some problems with the comment section last week . . . it’s straightened out now.  My apologies for any inconvenience.)

10 Responses to SOMETIMES A GUN MAKES ITS OWN POINT