“STUPID TUESDAY” (And something new from David Hayden)

I’m taking a week off from our usual posts.  Typically I write about the bar life — free beer, naked women, lousy tippers, and patrons over-indulging.  I like stories about gangsters and strippers, or those who just behave like them.

But already two days late with this post, and after filling in a couple of extra shifts at the club, I’m pretty much “bar-lifed” out.  (Do other bloggers sometimes feel this way?)

So instead, today’s space goes to two friends and fellow bloggers that I think have something unique to offer.  Larry Hannay is working on a site that could change the way politicians behave, while David Hayden offers a fantastic new tool for restaurant marketing.  (Will I have room after that for a link about craft beer, and some great photos by Jack McAllister?)

Everyone feels the same way about politicians . . . what the hell are they doing to us?  They make all these promises, but once elected they simply cave in to big money and special interests.  Will they ever change?

StupidTuesday.com tracks all 500+ US Senators and Representatives, and although the site is new, each of those politicians already has a page where you can review their records.  How did they vote?  Where they influenced by big money, lobbying, quid pro quos, rich special interests?

Listen to one company’s explanation when questioned whether they had “bought” a legislator’s vote:

“A spokesman for the company said there was no connection between the Representative’s earmarks {which favored their company} and the campaign contributions they have given him.  They called the timing of the contributions a coincidence.”

How often does this happen?  Even a quick look at Stupid Tuesday shows that it happens a lot more often than we know.

What can we do about it?  Who can follow all that’s going on with our Senators and Representatives (apparently a lot of it behind our backs.)   Who has the time to attend political meetings where we’d have a chance to voice our opinion?

Now, with just a few clicks it’s easy to do both, on-line.

The politicians on Stupid Tuesday are listed by state —  choose your state, then select the legislators you want to look at.  You’ll not only see they’re up to, you can also rate each politician’s actions with a vote of your own.  The individual votes add up, and are then displayed on an “approval bar” that runs from a high of “+5”, all the way down to a low of “-5” (for the most boneheaded law-makers.)

This could be fun.

I registered on the site (it’s easy and free), and went right to the section for the Massachusetts legislators.   That’s where I discovered an interesting vote recently made by Senator Scott Brown. 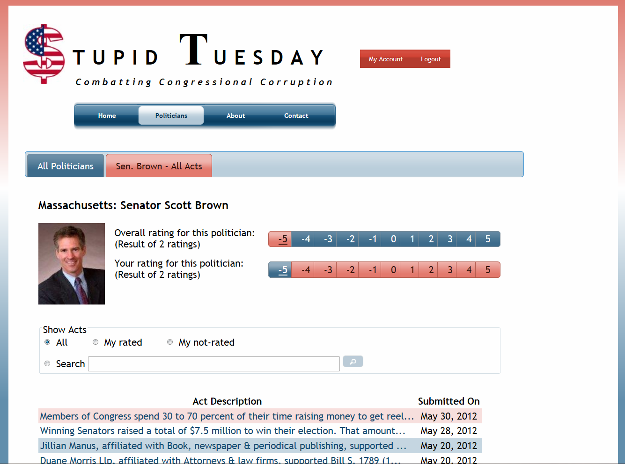 This web site just went live this past weekend, and I’m sure it will continue to develop.  Right now the only actions listed for each politician seem to have been provided by the people at Stupid Tuesday — but there’s a click-on button that enables readers to add their own choice of legislative actions that may have involved influence-peddling, or Congressional corruption.

Stupid Tuesday might actually affect the way things are done.  It might make for a better election this coming November.  If enough of us start to log our opinions, the politicians will no longer be able to simply ignore us.  Now wouldn’t that be nice.

As Larry puts it:  “The public doesn’t elect the politicians, individuals do.”

Regulars readers may have heard me mention David Hayden before; he’s the creator of the Hospitality Formula Network.  Also the author of Tips 2: Tips for Improving Your Tips, David is by far the most prolific blogger I know, and now he’s added yet another great resource to our on-line community.  His new blog, Restaurant Marketing Plan, almost makes me wish I was still a GM (damn, why wasn’t this was available back then?)

We all know that large-scale operations and chains have entire departments that do nothing but work on marketing.  Meanwhile — with limited time, small budgets, and lack of expertise in this particular area — most marketing plans of mid-size restaurants barely get off the ground.

God Bless the Internet.  Now with one click on the web, any operation can swing a club just like the big boys.

Restaurant Marketing Plan offers detailed and insightful suggestions on such things as SEO for restaurant web sites.  (Mr. Hayden works professionally in this area, under Kansas City SEO, but his advice on RMP is free.)  RMP can show you how to maximize the business potential of social networks like Facebook, or how to use emerging technologies (do you know how to use QR Codes?)  There is so much good stuff available on this site . . . and it’s free.

I realize not everyone’s in restaurant management, but I think anybody in the business might want to look at this site.  (It doesn’t hurt to mention good ideas to your owner . . . in the end, more business for your establishment means more money for you.) 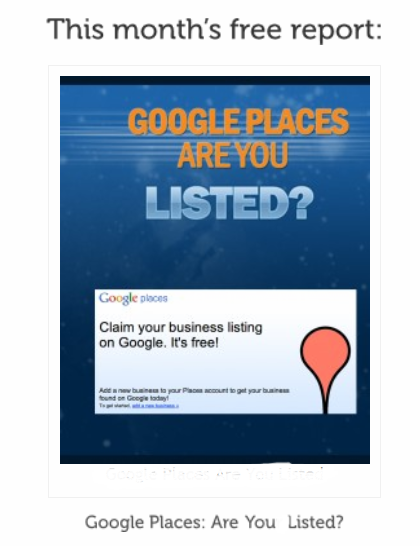 While looking through RMP, I saw something about a free monthly report.  I clicked — and after providing an email address, I immediately received this month’s link.  It’s a report on how to best use Google Places.

There were 20 bullets explaining the advantages of signing up now for this new, free Google listing, and a list of five tips on how to make the most of it.  Here’s one of them:

“The first and most important thing to do is to make sure that you claim your Google Places page so that no one else can edit your listing.  Claiming your Google Places page lends far more authority to your page and is vital if you are truly to take advantage of all that this incredible feature offers the local business owner.”

Claim our “Google Places” page?   Before reading this I hadn’t even known what  a “Google Place” was, . . . I continued reading:

“The beauty of Google Places is that it is essentially democratic and designed to give the true local business owner the edge over larger corporations who may have a local outlet of presence but are not locally based.”

I stopped reading so I could forward the link to our Johnny D’s owner, Carla DeLellis.

Then I emailed Mr. Hayden to thank him; here’s part of his reply as to why he started RMP:

I know that restaurant marketing is probably not foremost on most reader’s minds, so I won’t drag this out.  (I guess it was like an old manager hearing the bell ring . . . it all came back to me.)  But if you are in management, or just want to help your independent owner bring in more business (for you and for them) — simply click Restaurant Marketing Plan.

(Ed. Note:  Just after I posted this, I received an update from Mr. Hayden.  Apparently “Google Places” will morph into something called “Google+ Local.”

This all moves way too fast for me . . . I’m going to wait for further updates from David’s RMP.  Further update, Jun 9th:  Click here for RMP’s latest update {6/7} on what’s now being called “Google+ Local.)

Carla DeLellis, Johnny D’s owner, has been “Green” long before it became hip.  I think she was “going green” way before they began calling it “Going Green.”

Grass-fed beef, cage-free eggs, recycling all our paper, plastic and glass containers . . . and now she’s committed to going local with every purchase we can.

When I asked about the switch to local beer — what happens when someone asks for a Bud Light? — she mentioned that local means it isn’t transported as far, which saves fuel, aside from often being fresher.  She also said she doesn’t want bottled beer because it’s a fuel-monster to ship, and costs the environment in recycling.

Fortunately, there are some really, REALLY good local beer companies nearby — and I mean nearby — a couple of them have offices just down the street.  You have to try Clown Shoes Brown Angel, or their Eagle Claw Fist (Lexington MA).  Or SlumBrew’s Flagraiser IPA (Somerville MA), or their Porter Square Porter.  (I imagine we’ll soon be putting some of Pretty Things beers and ales on tap — they’re also award-winning beer-makers with offices just up the street, in the other direction.)

Anyway Johnny D’s GM, John Bonaccorso, was interviewed about all this on WGBH Radio last month.  (WGBH is the PBS station that brings you “Frontline” and “Nova”.)  Click on the picture below to hear the interview. 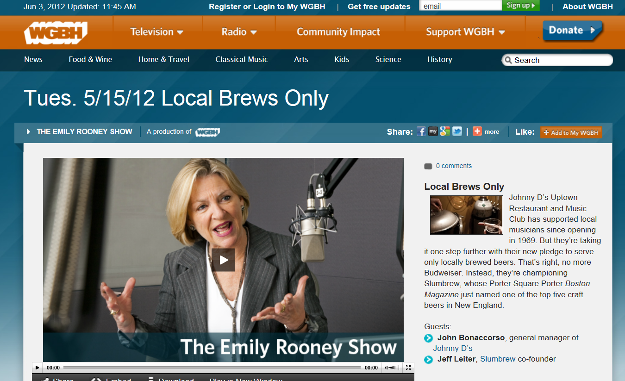 As long as I’ve gotten completely off-track with this post, I’m going to end with three photos taken by my cousin, Jack McAllister, from the dock of his Seneca, New York home.  Jack has been doing a series of showings at two upstate New York Wineries —  The Billsboro Winery and The Sheldrake Point Winery.  As always, Jack donates a significant portion of the proceeds to the Michael J. Fox Foundation (for Parkinson’s research.)  Here are three of my favorites of his photographs. 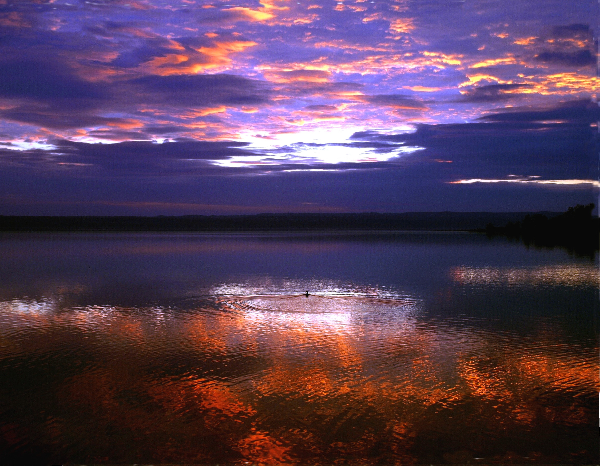 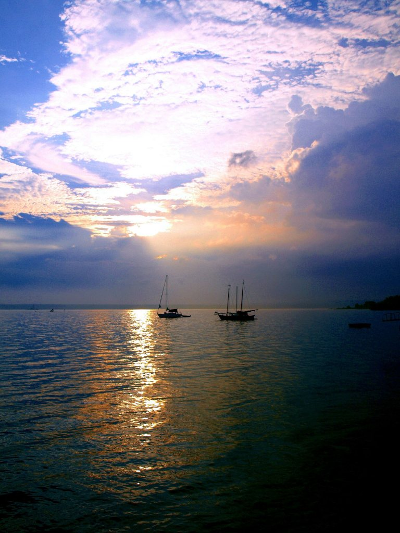 For inquiries about Jack’s photos, you can contact him at senecacharles@live.com

We’ll be back this coming Saturday with a more typical post for Life on a Cocktail Napkin.

13 Responses to “STUPID TUESDAY” (And something new from David Hayden)